Eyes in round 9 on Russian-Danish duels

After a seven-week break for the Women’s IHF World Championship and the holiday period, the DELO EHF Champions League is back in action with five games this weekend.

The top two teams of group A collide on Saturday, as Rostov-Don host leaders Team Esbjerg in a pivotal match for the standings.

Group B also features a Danish-Russian clash as Odense Håndbold and CSKA, ranked fifth and fourth, respectively, will meet in Denmark.

Vipers Kristiansand vs Krim Mercator Ljubljana and IK Sävehof vs Györi Audi ETO KC have been postponed due to the COVID-19 cases at Krim and Györ. Also the match between Metz Handball and Kastamonu Belediyesi GSK will be postponed.

However, the EHF has exchanged the matches between the four teams in rounds 9 and 13, meaning that Sävehof and Vipers, whose encounter was originally scheduled for round 13, will meet on Sunday. The match between Györ and Krim remains postponed.

The initial Match of the Week, Brest Bretagne Handball vs CSM Bucuresti, was also postponed after Bucharest had announced several infections with COVID-19 in the squads. 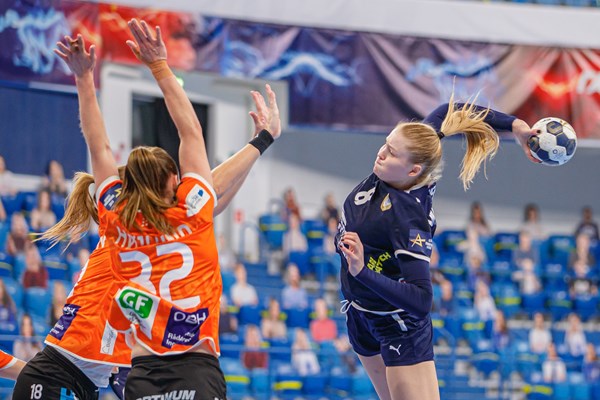 It will be fun playing against the best team in Scandinavia. We will be playing with a lot of pride. The last time we met each other we performed well for 45 minutes. This time we are on our home court and we will try to keep up for as long as possible, as well as to make sure that we keep the energy level high for 60 minutes.
Rasmus Overby
IK Sävehof head coach

Next Article Call for applicants for seventh edition of MESGO

Summary: Coverage of the final round of the group phase in the DELO EHF Champions League 2021/22

SUMMARY: Team Esbjerg remain top of group A after beating Rostov-Don, while Vipers Kristiansand moved up to second in group B after a compre…

Esbjerg and FTC to meet in Denmark

ROUND PREVIEW: Two exciting matches between Danish and Hungarian teams are among the highlights in round 11 of the DELO EHF Champions League

Top four sides in group B to clash in fiery round

ROUND PREVIEW: The group phase of the DELO EHF Champions League is approaching its business end with round 10 this weekend