Three Danish teams had won their matches in the Women’s EHF Cup on Saturday, and now Herning-Ikast Handbold followed their example, beating TusSies Metzingen in a tight match 31:28.

In the second match on Sunday, E.S Besancon Feminin claimed their first points in the group phase, defeating Larvik HK 32:25.

•     Herning-Ikast are second in Group B with four points; third-placed Metzingen are on two points
•     Helene Fauske scored 11 goals for Herning-Ikast
•     Larvik are yet to claim their first points in Group C

Both sides had been level on two points before the game, but Herning-Ikast clearly moved ahead of Metzingen, who remain in third place following their second straight defeat.

Helene Fauske had a great match for Herning-Ikast, scoring 11 goals. With 24 goals in three matches, Fauske is now the second top scorer in the competition behind another player from Group B, Andrea Kobetic from Siofok.

Thanks to back court goals from Monika Kobylinska and Patricia Kovacs, it was Metzingen who initially had the upper hand in the first half – and they led 8:4 in the 13th minute. An impressive 6:0 run helped Herning-Ikast to pull in front 10:8, but a timeout helped Metzingen to stabilize their game and lead by one goal at the break.

However, the home side were dominant in the second half and led by two to three goals during most of it. Metzingen almost drew level at 28:27 three minutes from time, yet Herning-Ikast’s Jessica Ryde made a couple of crucial saves, and her teammates scored three more goals in the remaining time. 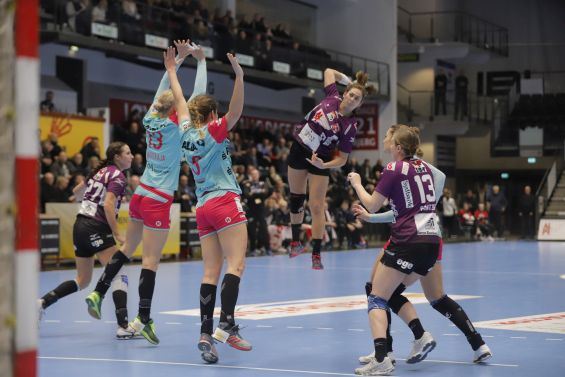 With Viborg HK and Kuban dominating Group C, Besancon and Larvik had both failed to collect any points in the first two rounds of the group phase. However, a long-awaited home victory helped the French side to improve their position, leaving Larvik bottom of the group.

Besancon had a slow start – they were passive in attack and lost too many balls, allowing the visitors to score from fast counter attacks, and Larvik took advantage to lead 5:2 in the 8th minute.

After a time-out was called by coach Raphaelle Tervel, Besancon started to turn the game around through faster and more aggresive play. Chloe Bouquet and Marine Dupuis led by example, and the French side were in front 14:11 at half-time.

Larvik were inefficient in attack, with turnovers and missed shots proving costly, and the hosts capitalised on their mistakes. Midway through the second half, Besancon’s advantage reached eight goals (24:16), and the French team had no problems clinching their first victory.

Raphaelle Tervel, Besancon coach: "The start was not so good, but when we came into the game the defence was very good – and we mananged to keep the same level until the end. We are very happy because we could use every player as well. The next game in Larvik will be very important because if we win there then everything will be open for the qualification."

Alice Leveque, Besancon left back: "First of all it’s the victory of a team. All of us knew that it will be an important game. Maybe not decisive but still important. We expected a tough game, we managed to come back and in the end we are pleased with the score."

Geir Oustorp, Larvik coach: "We did a lot of technical errors. We managed to start the game very well, but after the first twenty minutes we didn’t manage to defend in the same way. I think we can win the next game, but it will be more complicated about the 7 goals difference."

Karoline Lund, Larvik left back: "We didn’t manage to stand together in defence like we did in the first twenty minutes. This and a lot of failure in attack brought us to this result. We still expect a tough match next week and we hope to win it."

Next Article Germany and France advance to semi-finals at worlds

How a defensive masterclass won Buducnost the title in 2015

GAMES TO REMEMBER: Buducnost capped off an unbeaten 2014/15 season with a flawless defensive performance against Larvik at the EHF FINAL4, t…

QUARTER-FINAL PREVIEW: Both the Danish and the German side need to overcome a deficit from their away match last week, while Siófok and Hern…

QUARTER-FINAL REVIEW: Herning were down three at half-time against Bistrita, but they turned the game on its head to take an impressive 29:2…

QUARTER-FINAL PREVIEW: The eight remaining contenders for the Women’s EHF Cup 2019/20 will play the first leg of their quarter-final this we…