There are many people in the beach handball world who need no introduction.

Hugo Madera is one of them.

The Spaniard is a three-time ebt Finals champion and, in October last year, Madera won his first Champions Cup gold when Sevilla took the title in Catania in the most dramatic of circumstances.

The question is who is Hugo Madera?

“He’s the guy that has the biggest smile when he arrives at a tournament,” Madera tells Dr Beach Handball in the first live interview in a series titled Humans of Beach Handball, where the lives and stories of those people involved in the sport open up and explain why they care so deeply about it.

It is clear Madera, who celebrated his 37th birthday at home in Madrid on Sunday, is one of these people, a man who genuinely loves beach handball.

A post shared by EHF Beach Handball (@ehf_beach_handball) on

“As soon as I step into the hotel or into an EHF meeting, my happiness starts,” he adds, reaffirming the seriousness of just how much having beach handball is in his life means to him.

Having been involved in the sport since his early 20s, Hugo has plenty of experience to call upon to explain just how much of a role the sport has had in shaping his life.

“I’m proud of this sport because I have played it for 15-16 years. I’ve had a good life, and good luck to be able play with and against some very good people. I’ve learned a lot from those who have won many titles – not just tactics but the different things in matches that can help.”

From Russia with Love

In a career that has taken him from the beginning with Alcala in his native Spain to Ekaterinodar in Russia and back home again, Madera has always lived his life through beach handball. Scrolling momentarily through his Instagram profile is evidence of that.

As was the time, back in 2017, when he asked his wife Ana, for her hand in marriage. Live on national television. Before a national championship final with Sevilla.

“That has to be my number one moment in beach handball, my wife would kill me if I said anything else.

“But it was a special moment, not just because of winning and asking my wife to marry me on national television with so many people watching, but because of the team.

“I had never won a national Spanish title and before the game we were talking beforehand in the warm-up. I said to the group, ‘ok guys, let’s do this’.” 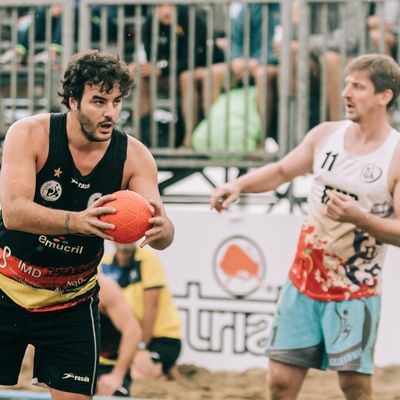 It was a typical moment Madera motivation. But it was the response of his teammates that reduced him to tears just 10 minutes before one of the biggest matches of his domestic career.

“They just said, ‘no, no, we have to win this because you’re going to marry Ana’. These were just young guys, who had never won anything before. They said we had to win for me – that was the best moment.”

Ana said yes. Sevilla won. And now wherever the beach handball season and schedule takes Madera, she is there shouting encouragement from the stands.

“I’m very proud that my wife comes with me on this experience,” he says. “For me in the first seasons with Ekaterinodar, I explained the feelings of playing in a big competition but she could not imagine it. That’s why for many years I got her to come. Now she is totally in love with beach handball. She knows everyone and she’s not just supporting me, she supporting everyone.”

Spirit of the Beach

Madera believes that team spirit – and a genuine sense of belonging – together with the friendships formed over a decade of diving and spinning across the sand every summer, is what keeps him and thousands of others returning to the beach each year.

“That’s the special point of beach handball,” he says. “Even when new teams join. If it’s their first season on the ebt they will watch the odd match, get to know a few people. The following year they come back, they know a few more people, and gradually they become part of the family.

“From my experience I don’t remember one bad word said in a match in 10 years. Even when you’re playing in a hard game and are fighting in a semi-final – at the end people can be on the losing side, accept it and hug it out. It’s perfect.”

Madera is aware that his dedication to the beach will only be able to continue for a few more seasons. “At least three or four,” he says.

But while he decides over the possibility of coaching the next generation of beach handball stars after his time in defence is over, there is one thing the Spaniard would love to see.

“The best way for this sport to become better and better is to be Olympic,” Madera says. “That’s the next step and final step. Being an Olympic sport can help you grow it internationally and nationally. Small competitions can grow.

“Now you have a big situation but it can be great.

So, for a second - say if, come Paris 2024, and beach handball is part of the Olympic programme, and let’s say if Spain were to beat all before them and storm to the top of podium and take gold…

Just imagine the smile on the face of Hugo Madera. 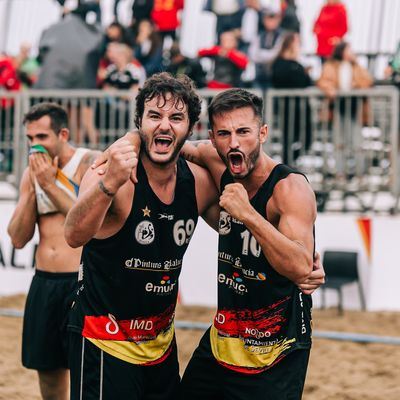 Previous Article What do you remember from the Women’s EHF EURO 2014?