Following two rounds full of excitement, quality handball and a few shocks, 24 teams remain in the hunt to win the first edition of the EHF European League Men.

The 12 teams who fought through qualification and 12 teams who sat pretty with a confirmed place in the group phase now know their fate for the season after the draw to divide the contenders into four groups of six teams was conducted in Vienna on Friday morning.

On the eve of the draw, the EHF and EHF Marketing held a video conference workshop with the club representatives for the 24 teams in the group phase. The essential information on the new brand and the EHF hygiene concept were provided to the clubs, in addition to the implementation guidelines. In addition, the premium partner IQONIQ was presented and the prize money structure explained. The winners of the EHF European League 2020/21 have €100,000 guaranteed, while a total of €1.836 million will be distributed among the 24 group phase participants.

12:41
That brings us to the end of our live draw coverage for the first group phase of the EHF European League Men.

We leave you with some important links as we look ahead to the next stage of the competition:

And remember, you will be able to catch it all live on EHFTV.com (free registration required) as well as follow along on our social media channels. See you on October 20!

12:11
What an exciting first group phase we can expect in the EHF European League Men!

The group phase begins on October 20 and runs through to early March 2021. We can look forward to months with these four groups providing us with plenty of thrills and entertainment. 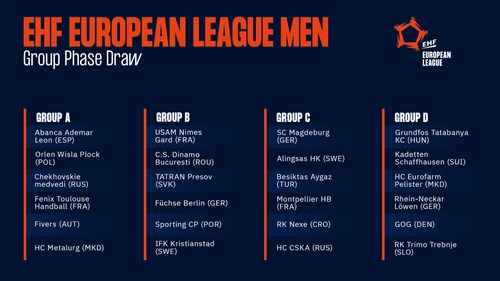 11:45
Now we know the groups. What do you think...do we have a 'group of death'? Tell us which group you think is hardest below!

11:31
And that's a wrap! The draw for the first EHF European League Men group phase is complete. Here are the four groups. 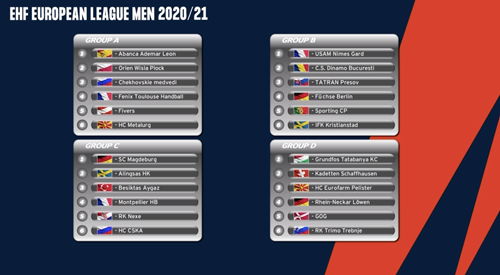 11:17
We are now halfway through the draw procedure. Take a look at the results so far below. 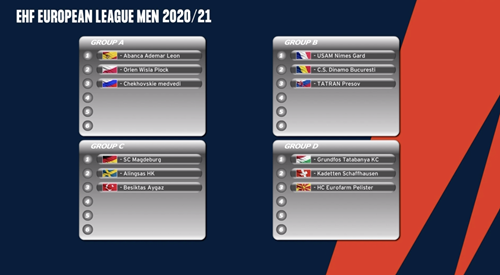 The first two pots have been drawn. See the groups below.

If you cannot watch live, we are heading over to Twitter now to live tweet the draw from the EHF European League page. Follow there for to-the-minute updates!

10:18
The final countdown is on! We are less than 30 minutes away from the draw.

10:01
Let's look at what the Twittersphere has to say about the draw.

Twitter's favourite handball nerd and professional player Rasmus Boysen has shared the potential groups he believes are toughest and easiest. What do you think? Tweet us @ehfel_official.

Among the 24 teams, we have a delightful mixture of EHF Champions League winners like Montpellier and Magdeburg, second-tier specialists Füchse Berlin and Tatabánya, and ambitious clubs such as Dinamo Bucuresti and Sporting CP. All are ready to battle it out over the 10 Tuesday evenings that will form the group phase.

9:20
Here's an overview of the six pots! Remember, country protection applies, so the clubs from France, Germany, Russia, North Macedonia and Sweden will avoid their domestic rivals.

European handball's new-look second-tier club competition has delivered two enthralling rounds so far and now we embark on a 10 round journey where the remaining 24 clash in four groups of six.

Next Article Five things to remember from round 3