The seventh edition of the EHF Beach Handball EURO headed to the sandy shores of Croatia.

It wouldn’t be a review of the EURO without us just copy/pasting a lazy overview of the city from the top of the internet, so here goes:

Umag is a city on Croatia’s Istrian peninsula. The remains of the 10th-century town walls include a gate and a drawbridge. Umag Town Museum, in a former defence tower, contains Roman-era objects such as amphorae and lamps, as well as contemporary local art. The Assumption of the Virgin Mary Church has an unfinished baroque facade and a 17th-century bell tower. A long sea wall from the 1800s shelters the harbour.

The event itself took place in Umag’s International Tennis Centre with a capacity of 4,000 fans. Given the plush facilities, it also meant matches could be played in the evening under floodlights.

It was also the first time that the senior and junior events were held at the same venue.

Writing in his tournament programme notes, EHF President Tor Lian, said: “In a departure from morning and afternoon sessions and utilising the advanced facilities of the International Tennis Centre, renowned for hosting the ATP event, an evening session of matches will be introduced.

“This will see matches being played each evening under floodlighting. As it is not only the golden Championship plate up for grabs, but also tickets to the 2012 Beach Handball World Championships – it is expected that as the matches progress, the excitement for the sporting fans will reach fever pitch as they root for their teams.”

After winning their first EHF Beach Handball gold two years before in Norway, Croatia made it back-to-back gold medals by beating Russia in straight sets in what was the third final in a row that featured the two nations.

In the bronze medal match, Spain secured third place with a shootout victory over Ukraine. It was Spain’s third medal in their history while Ukraine finished fourth for the second time.

Given the event was taking place on Croatian sand it turned out to be a memorable EHF Beach Handball EURO for the hosts as the women’s team joined their male counterparts in winning gold. Their shootout win over Denmark in the final saw them repeat their 2007 victory.

Italy, the winners two years prior, won the battle for bronze, beating Norway in a shootout.

If you clicked on this story to read all about this EHF Beach Handball EURO and you DON’T watch this video of the 2011 then please unfollow yourself from all of the EHF-related social media accounts.

The Croatian teams won their gold medals in front of legendary Lino Cervar, who was present on the final day and awarded the All-star Team. 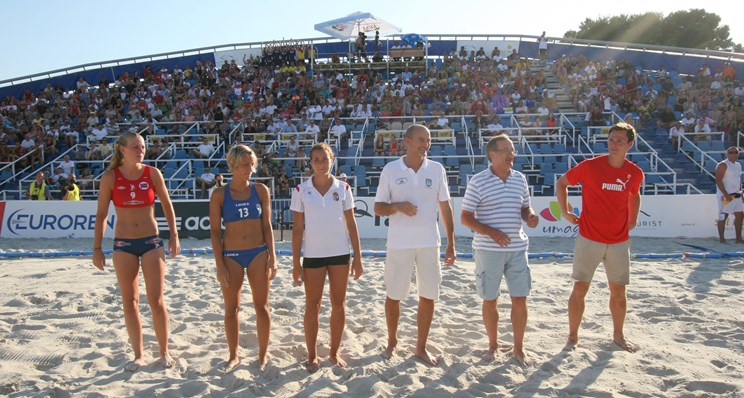 Name something better than Croatia winning gold at home in front of 4,000 fans. We’ll wait.

Next Article Six teams to contest IHF/EHF Trophy in Tbilisi

REVIEW: Both the men’s and women’s team beat Spain in the final of the Beach Handball EURO in Prague

Summer blog: Austrian-Czech final in Varna; Crunch time at b…