The starting grid for the Women’s EHF EURO 2022 qualifiers is full, exactly four months before the throw-off in October.

Following the conclusion of qualification phase 1 on Sunday, all six qualifiers groups – with 24 teams playing for 12 places at the final tournament in Slovenia, North Macedonia, and Montenegro – are now complete as Portugal, Greece, and Faroe Islands have grabbed the three remaining tickets.

Last weekend, Portugal eased through their group with clear wins over Luxembourg, Cyprus, and, in the deciding match, hosts Kosovo.

That dominance earned them a spot in qualifiers group E, where Spain, Hungary and Slovakia will be their opponents.

Playing at home, Greece had a similar convincing run in their group as they beat Bosnia and Herzegovina, Latvia, and Italy, all with a margin of more than 10 goals.

Their reward is a place in qualifiers group C, where Netherlands, Germany and Belarus will be waiting.

Faroe Islands were involved in a lot closer affair. Hosting a three-team group, they edged Finland by two goals in their opener before also beating Israel to advance to the next phase.

They can look forward to playing Denmark, Romania, and Austria in qualifiers group B.

Two years ago, Portugal, Greece, and Faroe Islands also reached the qualifiers phase ahead of EHF EURO 2020, though Portugal remain the only team from this trio to have actually made it to a final tournament once – in 2008 in North Macedonia.

Qualifiers start with rounds 1 and 2 in October 2021

The six groups for the EHF EURO 2022 qualifiers are as follows: 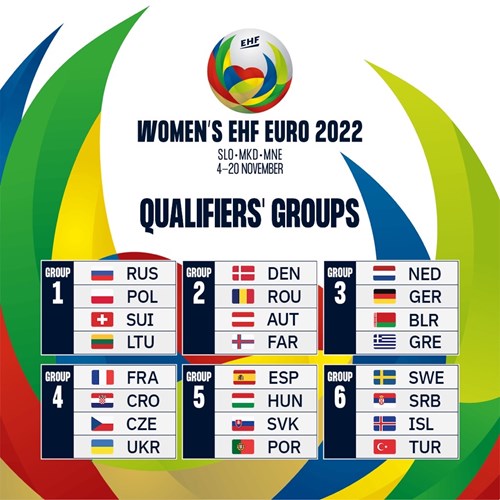 Those six groups will battle it out for 12 tickets to the final tournament on 4-20 November 2022. The six group winners and six runners-up will join the four already qualified teams: defending champions Norway and the three co-hosts – Slovenia, North Macedonia, and Montenegro.

FEATURE: Latvia and Bosnia and Herzegovina return to qualification phase 1 of the Women’s EHF EURO 2022, while Cyprus make their debut