The beautiful brutality of a close group

The situation heading into round 3 for group B at the Men’s EHF EURO 2022 means it will be a very tense night in Budapest on Tuesday, with both main round places still up for grabs — and all four teams in the race.

Iceland lead the group with four points after two wins, ahead of Hungary and the Netherlands on two points apiece, and Portugal rounding out the ranking with no points yet.

Points may separate them, but on the court, the difference has been negligible with generally outstanding performances all round — the only exception being Hungary and Portugal a little below form on day one, which is one reason the group has ended up being more tightly contested than expected.

Putting the points gained based on wins to the side, the teams’ goal differences show just how tight the group has been — Iceland are on +5, the Netherlands are on +2, Hungary are on -2 and Portugal on -5.

In round 1, the final score lines were three and four goals — 31:28 as the Netherlands overthrew Hungary, and Iceland beat Portugal 28:24. In round 2, both games were won by one goal with the results coming down to the wire — 31:30 for Hungary against Portugal and 29:28 for Iceland versus the Netherlands. 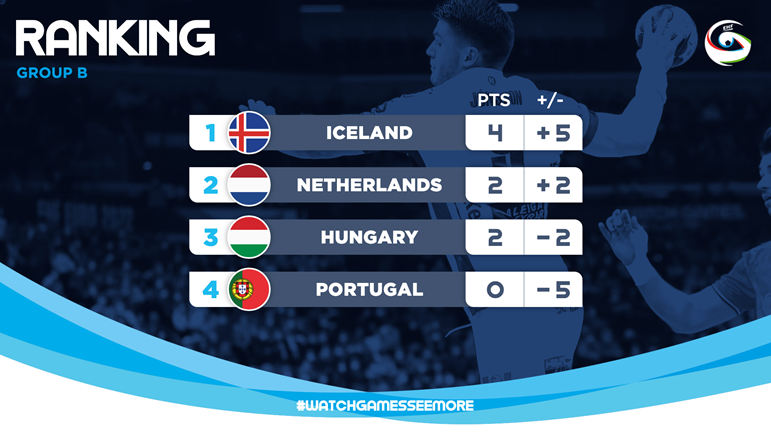 No other group at the EHF EURO 2022 has been this close across the board. And now, two teams will go home after the preliminary round and it is impossible to say who is more deserving of progression.

Is it the Netherlands, who have stunned with their performances above what was expected of the team in only their second EURO and third major championship in history? Is it Hungary, who are co-hosts of the championship, were widely predicted to have one of the best tournaments in years and have perhaps only stumbled due to the pressure felt in round 1 in particular?

Is it Portugal, who came so close against Hungary and have delivered highly enjoyable matches after demanding attention on the biggest stages in the last years? It seems a shame to see any of these teams exit so early — and the same certainly applies to Iceland.

Group leaders teetering on the edge

Iceland naturally appear the side most deserving of one of the main round berths at this point, as they arrive at round 3 unbeaten — and if we consider the term ‘deserving’ in this context, then the main definition must of course focus on the actual results. However, the Nordic side are actually in a precarious position and could very well be one of the two teams to exit the competition on Tuesday night.

If Iceland win, they are sure to go through to the main round. If they lose to Hungary and the Netherlands beat Portugal, depending on the margin against Hungary, Iceland’s EURO campaign can come to an end.

“This is the situation and we are of course aware of that. This is the way it is. It is a very hard group. We need to win against Hungary to be able to qualify — that is our goal,” says Iceland coach Gudmundur Gudmundsson, emphasising how the team would ideally control their own fate, take the victory needed and avoid playing the waiting game to see the result of the later Portugal versus Netherlands match.

“We believe we have a chance there. They are of course playing at home and have 20,000 spectators to support them, but I think we have a chance and we will do everything we can to qualify for the main round,” Gudmundsson adds.

As Gudmundsson highlights, although Hungary enter round 3 in the worst position out of the three teams that can end on a four-point tie, they will have almost the entire Budapest Handball Arena behind them and are in the prime position to pull off a miracle win that will see them through.

Silva: “We always have to play to win”

But if Hungary have already beaten Iceland, Portugal’s main round chance will be over, so will the ‘Heroes of the sea’ be motivated enough to overcome the in-form Dutch? A main round ticket is a huge motivator. Pride and ending a competition with at least one win can be, but certainly not as much. However, Portugal back Rui Silva promises his side will be driven to win no matter the result of the earlier match.

“I believe we will be better and, regardless of what happens in the previous game, we always have to play to win. We are talking about our pride and something that can contribute to the World Championship qualification play-offs,” says Silva.

“Regardless of the result that happens in the previous game, it is obvious that we will be disappointed if we get to the game and we don’t have the chance to make it to the main round, but we have to try to find the strength and focus to try to win the game.”

If Iceland do take the victory against Hungary and go to six points, then Portugal move into the main round spotlight. Two losses, but their chances are not gone, and they could end up kicking both Hungary and the Netherlands out in the last match for the group. Two losses before the chance for a win that would erase all memory of those disappointments and make one of the great EURO stories of a miracle when all hope seems lost.

Portugal would have to win by at least two goals in order to write such history. If they win by one, it will be the Netherlands who continue to what would be their first main round appearance.

“They are a team that are surprising for everything they’ve done — a team that plays very fast handball and that has two players [Luc Steins and Kay Smits] in particular of above-average quality,” says Silva.

“I believe it is the game most similar to Iceland’s game due to the characteristics of the players themselves, but I think that after the game we played [against Hungary] we feel better. I believe that we can achieve a positive result, but unfortunately, at the moment we are not dependent on ourselves alone.”

Portugal, Iceland, Hungary and the Netherlands have all given Budapest a memorable opening to the EHF EURO 2022, but only two can continue the fight for the trophy, and that is the beautiful brutality that makes the competition what it is.

One thing is for certain: this group B battle will keep us on the edge of our seats to the end.

Four teams still dream of the main round in group B

GROUP B PREVIEW: With all four teams still having a chance to progress to the main round, the last two games in group B promise to be decisi…

The race for the main round

ROADMAP: Denmark, Spain, Germany and Poland have booked their main round tickets, but what do other teams need to achieve to join them?

Previous Article Norway go through the motions for win against Lithuania

Breaking down the EHF EURO 2024 qualifiers

FEATURE: Following last week’s draw event, we now know the path to Germany 2024 for the 32 contenders

The impact and evolution of pace

IN NUMBERS: Data gained at the Men's EHF EURO 2022 show the increasing importance of playing with pace in handball

Four teams still dream of the main round in group B

GROUP B PREVIEW: With all four teams still having a chance to progress to the main round, the last two games in group B promise to be decisi…

GROUP B PREVIEW: After their defeat in front of 20,022 home fans, Hungary will try to overcome their problems and beat Portugal

Spain rely on experience as teams announce their rosters

NEWS UPDATE: Top contenders at the EHF EURO 2022 have named their rosters for the final preparation ahead of the tournament