The build-up to the voting for the DELO EHF Champions League 2020/21 All-star Team is taking shape, as the third batch of nominees has been revealed on Wednesday.

This time, the network of journalists working for the EHF across Europe have picked their 10 standout performers of the season, with one player for each position, best defender, best young player, and best coach.

Earlier, the head coaches of all 16 teams in the competition and the All-star Team’s title sponsor, the Delo Group, provided 10 names each. 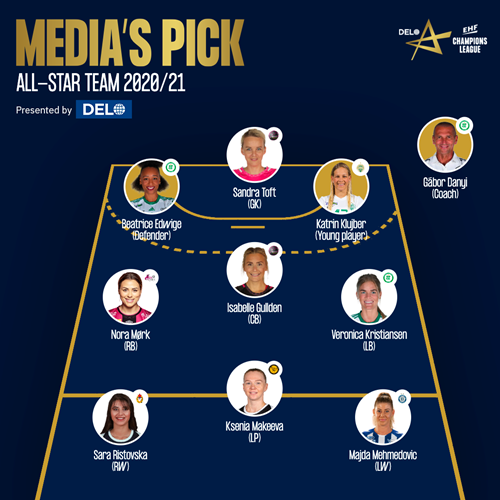 In the journalists’ choice presented Wednesday, two teams are represented by more than one nominee: Brest Bretagne Handball have goalkeeper Sandra Toft as well as centre back Isabelle Gulldén in the mix, while Györi Audi ETO KC have received three nominations, with Veronica Kristiansen as left back, Beatrice Edwige as best defender, and Gábor Danyi as best coach.

The other two teams competing at next month’s DELO EHF FINAL4 have one player each among the nominees revealed Wednesday: Vipers Kristiansand with right back Nora Mørk, and CSKA with right wing Sara Ristovska.

The nomination procedure has now reached the halfway mark, with 30 names known. After all nominees are announced, fans will have a total of 60 names to choose from, with six nominees in each position.

Voting will be launched soon here on eurohandball.com and the All-star Team will be announced immediately prior to the start of the DELO EHF FINAL4 in Budapest on 29/30 May.