A decade after the introduction of the ‘RINCK’ Convention EHF Master Coach Course, the current cohort started their education on the fringe of the Men’s EHF EURO 2022 in Hungary and Slovakia. With 24 participants dedicated to furthering their coach education to the highest level, the first module took place from January 13 to 19.

The EHF Master Coach Course began in its current format in 2012, with over 150 graduates of the programme since then. Participants must pass through three modules in order to obtain the EHF PRO Licence, including a thesis defence in the third and final stage.

“The game changes so trainers must keep developing also”

Lectures in this opening module were presented by EHF lecturers as well as top coaches David Davis, current coach of EHF Champions League club Vardar and former national coach of the Egypt and Russia men’s sides as well as Veszprém; Xavier Pascual, former Barça coach now at the helm of Dinamo Bucuresti; and Monique Tijsterman, current coach of the Netherlands women’s team and member of the EHF Methods Commission.

“We had seven fantastic days together with inspiring lecturers and experts and enthusiastic participants from all over Europe. There was a lot of interaction between the participants and lecturers/experts, which made this Master Coach Course a high-level course. I am looking forward to the future,” said Tijsterman, also commenting on why the EHF Master Coach Course is so vital for the continued development of handball.

“It is really important that we have well trained coaches at every level. Not only at the top level but also, for example, youth level — now and in the future. The game changes so trainers must keep developing also. Coaches’ education is extremely important because then we will have high qualified trainers all over Europe.”

“They can feel that what they are learning is something practical, something useful”

The module one programme addressed a variety of topics that fell under several main categories: coaching philosophy, match analysis, leadership and management, practical coaching, theory of coaching, and individualisation.

“The students of the course said that that they find it really practical,” said Davis, speaking about the feedback he received after his presentation. “They can feel that what they are learning is something practical, something useful, something that they are going to need. This is more or less the reactions that I heard.”

Davis feels it is important for upcoming and even current coaches participating in the course to be able to hear from those who have experienced the top level, such as the EHF Champions League. He also emphasises the importance of coaches learning on both a practical and theoretical level.

“If I go to the course and I’m a coach, probably I’m also going to be more on the side of the practical than the theoretical because I want to know how to train better, how to be a better coach, or how to manage better the team, to be a leader. And if someone that is working in the best league, that is the Champions League, can say something, can speak something, no matter the subject, then this will help a lot.”

The second module is scheduled to take place in Porto in July, before the third and final module on the fringe of the Women’s EHF EURO 2022 in Slovenia, North Macedonia and Montenegro in November. Participants must also complete tasks in between modules.

The second module will focus on subjects such as goalkeeping, physical preparation, mental preparation, injury prevention, communication and new trends in coaching. In module three, along with the thesis defence, tactical approaches to match analysis will be examined. 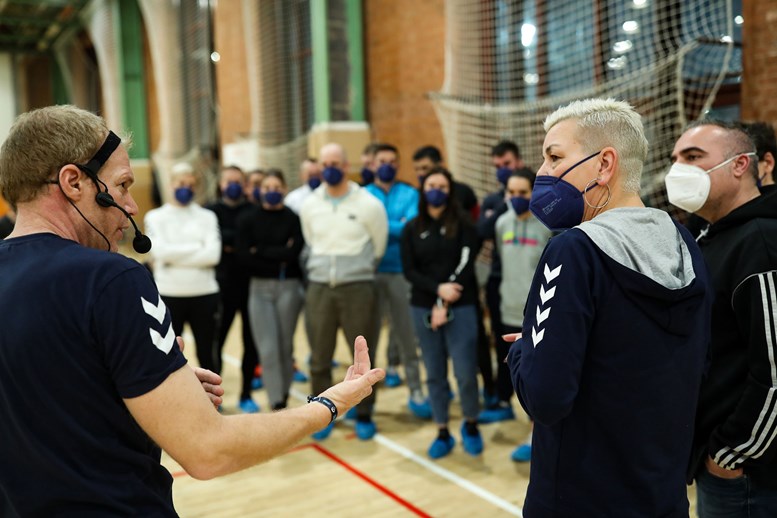 Value in learning for the future

This edition, one of the most high-profile participants is Spain national team stalwart Nerea Pena, who won three medals playing for her country and is currently on court with DELO EHF Champions League title holders Vipers Kristiansand.

Pena completed the RINCK Level 3 licence necessary for the Master Coach Course and found this higher-level qualification to be the natural next step as she looks to what she will do after her on-court career.

“It was really fun, to learn, to be with handball people, with handball coaches, and be around this handball work,” says Pena of her experience then. In the past two years, Pena has subsequently done some coaching with young players.

“It’s really inspiring to be with kids again and to see how they are. They are also looking at you as a handball player and something that they want to became, and it was really a nice experience for me.”

Pena believes there is great value in active players furthering their education in handball.

“I chose to make this Master Coach, because I don’t know what will be with me in my future — there are not so many handball years left — and I would like to to be around handball if I can. This is a really nice opportunity in case I want to be a coach.

“I think also it’s nice to keep learning, to keep attending really high level coaches’ courses because I think you you can learn a lot from them and I really like this a lot. So this is a really great opportunity, also for active handball players, to keep studying and to keep doing education to be in the handball world in the future. It’s not easy to be an active player and do these kinds of courses, but the EHF have, from the beginning, made it easy for me, and I appreciate that.

“I would like to get the best from this course and to learn as much as I can, if maybe one day I become a coach, to be as better a coach as I can.”

FEATURE: Four updates of the official rules, taking effect on 1 July, will be presented at the EHF convention this weekend

Heads of refereeing gather for first convention in Vienna

Men’s EHF EURO 2022 analysis: The rising stars for the futur…

NEWS: Part three of the qualitative Men’s EHF EURO 2022 analyse focus on the talents of the tournament

Last chance to apply for next European Handball Manager prog…

NEWS: 20 places up for grabs on the popular programme at the German Sport University Cologne

NEWS: EHF experts publish qualitative analyses of the Men’s EHF EURO 2022 - in our first feature we focus on the results for the attack

‘Learn from the best’: how stars help a young generation

NEWS: A new EHF grassroots project features a video series with some of the biggest handball stars giving advice to tomorrow’s stars

‘This is me’ series celebrates female players

INTERNATIONAL WOMEN’S DAY: To celebrate women’s achievements, here is a selection of the best ‘This is me’ stories shared by female players

‘The Final Whistle’ reveals the other face of the ref

NEWS: A new in-depth video series goes behind the scenes with EHF referees and delegates to showcase their work and personalities