Vestmannaeyjar, Zubri and Gracanica progress to round 2

The 2022/23 season of the EHF European Cup Men, the third-tier European club competition, threw off with 12 round 1 matches played this weekend.

Three teams – Iceland's IBV Vestmannaeyjar, HC Robe Zubri from the Czech Republic and RK Gracanica from Bosnia and Herzegovina – reached round 2 after winning double-headers at home. 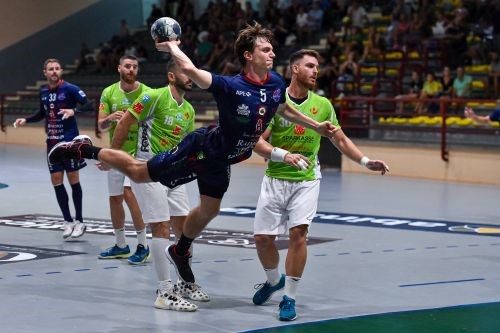 Sassari pull ahead in Italian derby

The only national derby in round 1 features two Italian teams: Raimond Sassari and SSV Brixen. In the first-leg encounter on Saturday, goalkeeper Valerio Sampaolo made 15 saves to propel Sassari to a 29:24 home victory.

However, the tie is still open ahead of the return match, and Brixen – who are making their return to the European club competitions after a 16-year break – will try to make a strong comeback at home next Saturday.

Next Article Dujshebaev and Kielce aiming for Cologne return

EHF European Cup Men to throw off on Friday

ROUND PREVIEW: Three round 2 participants will be confirmed following the double-headers in the opening round this weekend

ROUND PREVIEW: Round 1 of the EHF European Cup Men 2022/23 will be completed this weekend

ROUND PREVIEW: 30 matches scheduled for this weekend will complete the line-up of round 3

DRAW REVIEW: 16 pairings of the EHF European Cup Men Round 3 have been drawn

GROUP B REVIEW: Flensburg beat Valur 37:32 for their third win in a row, while Ystads won their first game in the group phase of an European…

GROUP C REVIEW: Skjern are the only away team with a win, as Granollers and Nexe continued their perfect streak

OFFICIAL STATEMENT: Flamur Salihu was sanctioned for his inappropriate and unsportsmanlike behaviour towards the EHF referee.

OFFICIAL STATEMENT: The team official of the Kosovan club was sanctioned for a blatant display of severe unsportsmanlike conduct in the last…

Pots for the EHF European Cup Men Round 3 released

DRAW PREVIEW: 32 teams divided in two pots ahead of the Tuesday's draw