Thursday will mark the start of a new era in European club handball. For the first time a draw for the group phase in the Women’s EHF Cup will be held.

The 16 qualified teams will be drawn into four groups – four years after the Men’s EHF Cup successfully made the transition.

Eurohandball.com gives 10 reasons why this draw will bring new excitement to the women's competition.

1. Gender equality was one of the main topics at the EHF Congress in St. Wolfgang last week. The European Handball Federation is not only a trailblazer in terms of women’s participation in all of their official bodies, but also in terms of competition. From the first throw-off, the Women’s EHF Champions League was implemented in the same way like the male version. Many other sports and federations needed decades to bridge this gap. After the in-depth analysis of the new format for the Men’s EHF Cup, all agreed to apply the same format to the women's competition.

2. The new competition is a perfect platform for clubs intending to participate in the Women’s EHF Champions League – for competitive reasons as well as for organisational matters. Featuring in a group phase in January and February prepares the clubs for the schedule and the challenges of the Champions League. That is what all participants of the newly merged men’s version agreed on. There is, however, one difference: After the quarter-finals, the Women’s EHF Cup will continue in the old format with the semi-finals and the final to be decided in a first and a second leg. But another EHF FINAL4 tournament is the goal.

3. The implementation of the new competition system is a clear signal of the ongoing focus of the EHF on improving women’s competitions and women’s handball in general. Top-level competitions attract more fans, more sponsors and more media. 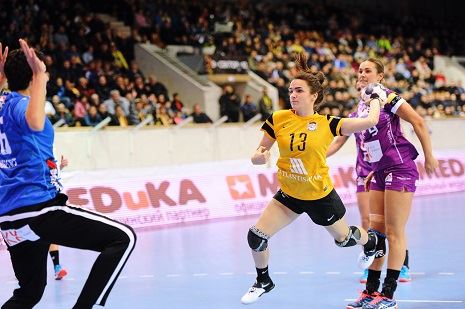 4. The group phase of the new Women’s EHF Cup is more than just consolation for those four teams which ended bottom of the four Champions League groups.

6. The format of the group phase guarantees more matches – and if you have a top-level squad, you want to play as often as possible. This group phase will be a real stress test.

7. The prospect of a new title holder. There are only two teams among the 16 group phase participants to have won silverware before in the three top EHF European competitions: Russian side Lada Togliatti are two-time EHF Cup champions and one-time Cup Winners’ Cup champions, while Denmark’s Randers HK won the EHF Cup in 2009/10. So chances are 14 out of 16 the competition gets a first-time champion.

8. Olympic champions on court: Thanks to Rostov, Kuban and Lada, more than half of the Russian Olympic gold medallists team are part of this competition, including Rio MVP Anna Vyakhireva. And as the icing on the cake, Russia coach Evgeniy Trefilov will highlight the EHF Cup as he is also coach of Kuban Krasnodar.

9. Also several Norwegian and Brazil world champions plus Norwegian and Montenegrin EHF EURO champions will be on court during the group phase. And to conclude the list of stars: Several former Champions League winners, including goalkeepers Katrine Lunde (four trophies) and Orsolya Herr, will fight for a quarter-final berth.

10. To every new competition belongs a new trophy, so everybody is eagerly waiting what the new cup will look like.

Next Article Four teams with imperative to win