After reaching qualification round 3 of the EHF European League Women for the first time, Chambray Touraine Handball advanced to the group phase.

Even though the club lacks European experience, some of their players have already played at the highest level, making Chambray one of candidates for the 'surprise of the season' title.

Most important question: How does the club approach participating in Europe for the first time?

Chambray Touraine have been one of the rising clubs in France over the past few seasons, and the club’s progression was rewarded at the end of last season when they qualified for the EHF European League.

Preparing for their first season in Europe was always going to be different from previous seasons. The club signed experienced players such as Alexandra Lacrabere and Rikke Granlund, both of whom have previously played in the DELO EHF Champions League. They join a strong roster that could have something to play for in this competition.

The 34-year-old left-hander is still going strong. After reaching the top level and playing in two DELO EHF Champions League finals with Vardar a while back, the former French national team player has chosen to help another club grow.

In three seasons at Fleury Loiret Handball, she used her experience to take the club to a new level. In Chambray, she remains just as hungry and could help the club become a regular feature on the European scene. 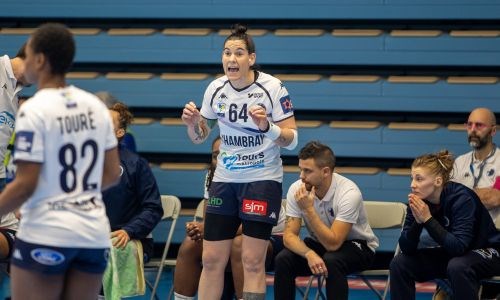 The 30-year-old back arrived in Chambray in 2019 and almost immediately became a stalwart in Chambray’s team. Her handball knowledge is limitless, as her father was an international player for Croatia, while her brother is also a professional player.

You can almost feel that on the court, as Nina Brkljacic finds solutions to almost every problem she faces. Brkljacic has not have played in a European club competition for 10 seasons, but there is no doubt that she will be able to raise her level.

Being newcomers, Chambray do not have any past achievements that they could match this season.

"We are very happy to be qualified for the main round – it was the first objective for us. The objective now for us is to learn and progress in this new competition,” said club manager Guillaume Marques.

In a very even group D, alongside SCM Ramnicu Valcea, Váci NKSE and Viborg HK, Chambray Touraine might even do a little more than that.

Copyright for the image of Alexandra Lacrabere belongs to Jon Forberg

COUNTDOWN #7: Viborg HK (DEN). The Danish side are looking forward to the international season with high hopes

Every point is a bonus for young Vác team

COUNTDOWN #13: Váci NKSE (HUN). With an average age of below 22, the Hungarian side is out to gain experience