MKS Zaglebie Lubin S.A. are heading into their first group phase of the EHF European League, making a reappearance on the European stage after failing to progress from the qualification round in the EHF Cup in their last three attempts.

The team, which has been led by legendary player Bozena Karkut for years, is in breakthrough mode generally at the moment. Last season, after consistently finishing second in the domestic league, Lubin celebrated their first title since 2011 – and only their second ever.

Now, they want to show they can also perform in Europe.

Most important question: Can Lubin make a breakthrough in Europe?

As the only representatives of Polish women’s handball this season in Europe, Lubin want to perform as best they can to prove their quality on the top level. With a mix of experience and young blood, they will try to overcome the obstacles waiting for them in group B.

Lubin’s last appearance on the European stage saw them reach the Last 16 of the Challenge Cup in 2015/16, where they lost to Kastamonu.

“We have strong opponents in our group, one of the top clubs in Europe. It will be a great opportunity for our players to play against them. I believe that we are not without a chance. We have a good team and if we are complete, I think we can play well against them all," says team manager Witold Kulesza.

Under the spotlight: Kinga Jakubowska

There are many great players in the team, but this season, the talented newcomer Kinga Jakubowska will be one of the players under the spotlight. Last season, the 22-year-old right back was the top scorer of the domestic league with 158 goals. Her debut in top-level handball in Poland was at 17 and her future is bright. After joining Lubin from KPR Gminy Kobierzyce, she showed her precision and persistence in the qualification rounds, scoring 27 goals in total. 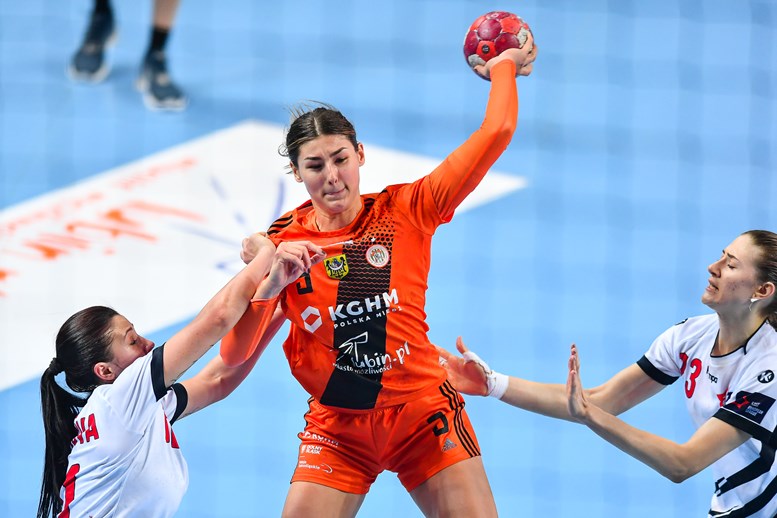 Lubin are aware of the strong opponents in their group and are looking forward to playing top handball matches in their arena. They know there are no easy matches at this stage of the competition.

“I think the draw is good. In my opinion, we can fight each of these teams. It is a great group of great players for the beginning of our adventure in Europe. We will give our best to go further as we can. There is no doubt each of us will push as much as we can,” says team captain Joanna Drabik.

Head coach Bozena Karkut is a handball legend in Poland. She was a phenomenal right wing and she won two EHF Champions League titles with Hypo Niederösterreich (1998 and 2000). Straight after taking her last European title, she joined Lubin as an assistant coach and just two months later became head coach.

She is backed up by another renowned Polish player – Renata Jakubowska has served as an assistant coach since 2010.

3 – Lubin players are competing at the World Championship 2021in Spain: Monika Maliczkiewicz, Adrianna Górna in the Polish national team and Patricia Matieli in the Brazilian national team

TALKING PIONTS: What we will remember of the EHF European League Men 2021/22 after Benfica lifted the trophy

FINAL PREVIEW: The hosts count on another boost from their home fans, while the defending champions rely on experience

SEMI-FINAL REVIEW: The hosts upset Plock in the second semi-final and will aim for their first European trophy in final against Magdeburg

SEMI-FINAL REVIEW: The titleholders from Germany have to fight hard against Nexe but end the first semi-final with a clear 34:29 win