Favourites off to strong start at Beach Handball EURO

Most teams that did well two years ago have been setting the tone again on the opening day of the Beach Handball EURO 2021 in Varna on Tuesday.

A total of 38 matches – 20 in the men’s and 18 in the women’s competition – were completed as the preliminary round got off to sunny start on the Bulgarian Black Sea coast.

In the men’s event, defending champions Denmark took the court three times and left it as winners on just as many occasions.

Highlight of their triple success was a 2:0 victory over Norway in the last match of the day on centre court, in a repeat of the 2019 final. It marked Norway’s second defeat of the day, after they lost to Spain earlier.

There were five more men’s teams with a perfect start into the preliminary round: Spain in group A, France in B, Croatia and Poland in C, and Russia in D. 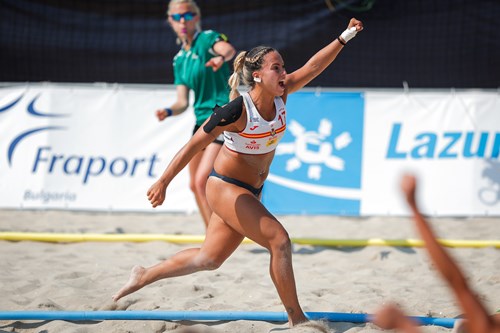 In the women’s event, Denmark are also the defending champions and they also won their opener 2:1 against Spian but lost their second game on Tuesday’s schedule, also in a shoot-out, against Ukraine.

With no team unbeaten in group A, Norway in group B, Germany and Netherlands in C, and France D are the only ones to come through the opening day with a clean sheet.

While many teams have already secured a top-three finish and a spot in the main round, some decisions will only be taken in the last matches of the preliminary round on Wednesday.

Previous Article Bulgaria feeling “much fire inside” at home EURO