Six EHF EURO 2020 medal winners will continue their international journey on club level in the Men’s EHF Cup group phase this weekend. But, together with Iosu Goñi at French side PAUC Handball, Gedeon Guardiola is the only gold medallist among them.

The 35-year-old Spanish line player and defence specialist of Rhein-Neckar Löwen has now won the EHF EURO twice, in 2018 and 2020, and the World Championship once, in 2013.

Seven years ago, in his first season with Löwen, he won the EHF Cup trophy in the competition’s first season under the changed format.

Guardiola’s last season at Löwen before joining former EHF Cup winners TBV Lemgo is also the last season of the current EHF Cup, as the competition will tranform into the European Handball League.

So Guardiola wants to close the circle, as he mentions in this exclusive interview with europeancup.eurohandball.com prior to Löwen’s group phase opener against USAM Nimes Gard on Sunday (live on ehfTV.com at 17:00 CET).

europeancup.eurohandball.com: How does winning the second EHF EURO gold medal feel like? Different from two years ago?

Gedeon Guardiola: Yes, it was different because this time we booked the ticket for the Olympic Games. That was the big goal of all teams at the EHF EURO 2020. We are very satisfied since we fif not qualify for Rio four years ago. That‘s why qualifying for the Olympic Games was our most important goal this time.

europeancup.eurohandball.com: How were the parties in Stockholm and Spain?

Gedeon Guardiola: In Stockholm we celebrated with the families in a restaurant, on Monday we flew to Madrid where 300 to 400 children were waiting for us at the airport. Tuesday we had many receptions with sponsors, with the Spanish president and the queen of Spain. That was exciting and exhausting.

europeancup.eurohandball.com: Are the batteries recharged now for the rest of the season?

Gedeon Guardiola: Our coach Jordi Ribera rotated a lot, so we were always fresher and not as tired as others during the EHF EURO. That was a key to success. If you play every two days, your legs are much fresher when you can rest a bit more, so I am not tired anymore.

europeancup.eurohandball.com: Is it difficult to switch from the Spanish national team back to Rhein-Neckar Löwen?

Gedeon Guardiola: I had two additional days in my home village to celebrate, with our mayor and the family. My kids wanted to go back to Germany so it all happened very quickly - and it was easy to return to club handball. But it is always different at the club than in the national team.

europeancup.eurohandball.com: The group phase of the EHF Cup starts on Sunday for Löwen. How is that after six straight years in the VELUX EHF Champions League?

Gedeon Guardiola: It’s a nice goal to win the EHF Cup again, but this time we face a really strong competition. The teams are better than seven years ago therefore it will be very interesting. Many say we are favourites, but this year is not as easy as it was then. 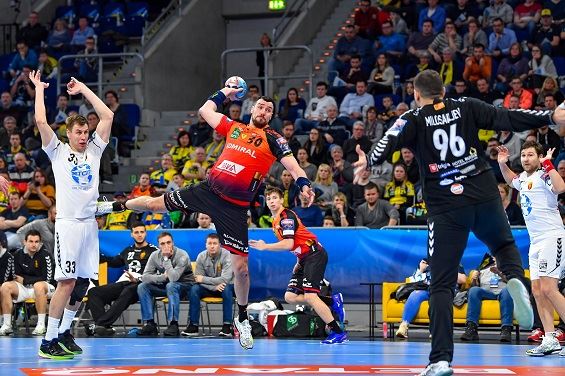 europeancup.eurohandball.com: Nimes, Holstebro and Cuenca are your opponents in the group phase. What do you think of them?

Gedeon Guardiola: I only know Cuenca, this team is very strong at home. My national teammates, who play in France, have a very positive opinion on Nimes. Even if the team is unknown to us, they have many good players.

eurohandball.com: Are you happy to enter the court in Spain, especially after the European Championship

Gedeon Guardiola: I have never played in Cuenca before, but I have heard it a lot that winning is incredibly hard there. I hope that I will be welcomed positively as a national player.

europeancup.eurohandball.com: In 2013, a few months after becoming world champion, you won the EHF Cup in your first season with Rhein-Neckar Löwen. Is that the goal again this year?

Gedeon Guardiola: I hope it works this time again. Winning two titles is my personal goal of the season. In my last year at Löwen, I want to win at least one trophy with them.

Next Article Now or never for ÉRD

Schwalb: “I am on fire and handball is my DNA”

INTERVIEW: In 2013 he won the Champions League with HSV, this week Martin Schwalb has returned from a six-year break as new head coach of Rh…

GROUP B REVIEW – Former Germany international Oliver Roggisch got a win in his first match as Rhein-Neckar Löwen coach, but it took some tim…