After being eliminated in qualification round 3 of the EHF Cup in each of the past three seasons, HC Zvezda felt a sense of relief this season when they finally broke that run and qualified for the EHF European League Women group phase.

One of four Russian clubs in the group phase – alongside HC Lada, Kuban and Astrakhanochka – Zvezda enter the group phase with the desire to represent Russian women’s club handball well on the European stage.

The burning question – Can the former EHF Champions League winners make an impact in group A?

In 2007/08, Zvezda became the first Russian winners of the EHF Champions League, a feat that has not been replicated by any Russian club since.

In more recent times, Zvezda have not had a sustained run in a European Cup competition since they reached the quarter-finals of the Cup Winners’ Cup in 2015/16, thereby making this season’s opportunity one that they wish to maximise.

“Our team has not entered the group stage of European competitions for a long time. Having received a chance this time, we plan to use it to the fullest,” said team manager Il'ya Rodionov.

The instinctive assumption might be that Herning-Ikast’s experience in Europe makes them favourites to win group A and that the other three teams, including Zvezda, will battle for second place – and Zvezda captain Anastasia Tserkovniuk certainly does not take any of their group A opponents lightly.

“In the group, there are no weak teams – everyone strives to show their best game. We will try, too,” said Anastasia Tserkovniuk.

Earning as many points as possible is a clear objective for Zvezda, but Tserkovniuk is aware that experience gained from this campaign could enhance the club’s prospects.

“Now our task is to gain points to the maximum and gain experience in the European arena,” added Tserkovniuk.

Under the spotlight: Natalia Nikitina

Having scored 47 goals in 11 league games, Natalia Nikitina is the team’s second highest scorer in the Russian league this season.

In the second leg of Zvezda’s qualification round 3 match against Bera Bera, which they won 29:24, Nikitina took control of the attack and was their main creative force.

With the 24-year-old left back also providing 50 assists in the Russian league, Zvezda's group A opponents will be keen to stop Nikitina from getting into her flow. 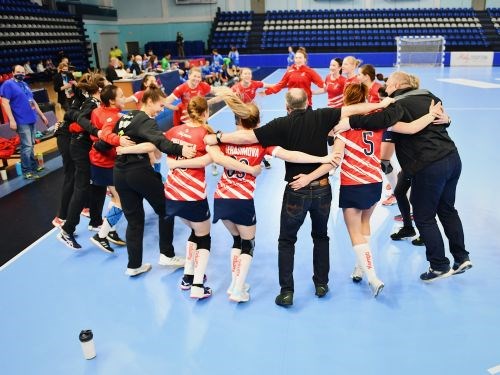 Zvezda’s squad only features players from Russia, but perhaps more interestingly, Zvezda only have four players aged 30 or over in their squad.

If they are to make an impact in the EHF European League, Zvezda will need big contributions from their core group of younger players.

A night to remember

In the EHF Champions League 2007/08 season, the Evgeni Trefilov-coached Zvezda Zvenigorod reached the final and faced four-time champions Hypo Niederösterreich. With the final still played over two legs, Zvezda’s 25:24 win in the first leg at home left them with plenty of work to do in the second leg in Austria.

In front of a crowd of 3,600 in Wiener Neustadt, the intensity and physicality at the beginning of the first half matched the occasion.

A four-goal run for Hypo put them ahead 8:6 just after the 15-minute mark, as Hypo goalkeeper Sabine Englert made several top saves, before Irina Poltoratskaya’s burst of goals towards the end of the first half ensured that Zvezda were level at 15:15 after 30 minutes.

Although Hypo immediately took command with three unanswered goals in two minutes to open the second half, Zvezda responded in kind and levelled again at 18:18. With Hypo narrowly ahead 26:25 in the second leg and the scores level on aggregate, the destination of the trophy was still unknown.

However, Zvezda then enjoyed a 5:2 run, giving them a 55:52 lead aggregate lead, and when Trefilov called his last timeout, the Russian side were on the verge of history – which was confirmed minutes later when the second leg ended 31:29 in Zvezda’s favour.

Next Article Møller and Mem steer Barça to 12th final