On the eve of throw off of the title-deciding weekend at the DELO EHF FINAL4 2021, the DELO EHF Champions League 2020/21 All-star Team is announced. The All-star Team, presented by DELO and with the final selection decided through fan vote, primarily features players that will be on court in Budapest, with just two exceptions.

Four players named in the 2019/20 selection are featured again, two have returned after a long wait and four individuals have made their way into the All-star Team for the first time. 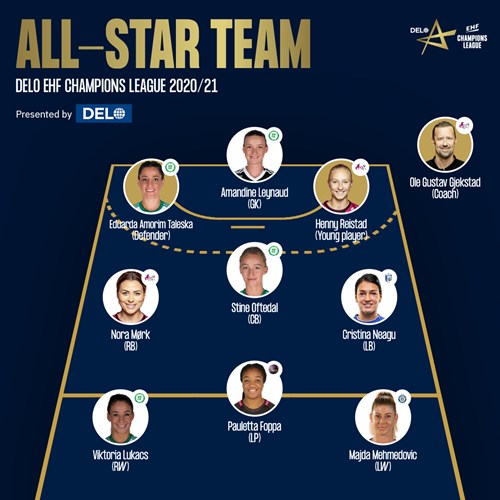 A total of 170,000 votes were cast and only one player earned over 50 per cent of the votes to cement her place in the All-star lineup: Györ centre back Stine Oftedal. Oftedal is joined by three of her Györ teammates: goalkeeper Amandine Leynaud, right wing Viktoria Lukacs and best defender Eduarda Amorim Taleska.

Close behind Györ, with three members of the DELO All-star Team, is Vipers Kristiansand. Nora Mørk was chosen by fans as the best right back of the season, while Henny Reistad scooped the best young player honours and Ole Gustav Gjekstad was named best coach.

From the other DELO EHF FINAL4 participants, Brest line player Pauletta Foppa earned the All-star honours for her position.

The only two players named in the All-star Team were two who have been frequently featured during their careers: CSM Bucuresti left back Cristina Neagu and Buducnost left wing Majda Mehmedovic.

The two closest races for the fan vote occurred for the goalkeeper and line player positions. Leynaud only narrowly beat CSM keeper Jelena Grubisic, who was MVP of the EHF FINAL4 in 2016 before Leynaud took the same award in 2018. For best line player, Valcea’s Asma Elghaoui came close to reclaiming her position from 2019/20, but Foppa had the edge.

Leynaud, Neagu, Oftedal and Amorim were all named in the 2019/20 All-star Team. For both Oftedal and Amorim, the 2020/21 nod is the third in a row. Neagu returned to the All-star Team in 2019/20 after a one-season break, before which she was named the best left back for four straight seasons starting in 2014/15 when she won the trophy with Buducnost.

Next Article AEK dominant against Ystad

LIVE BLOG: Round 4 throws off in Celje and Bucharest

LIVE BLOG: Running coverage of all eight matches in round 4 of the Machineseeker EHF Champions League 2022/23 on Wednesday and Thursday