The EHF Champions League Men returned for the first matches of 2021 on Thursday night, with five clashes – all rescheduled from previous rounds.

Don't forget to take a look at all the EHF Champions League Men group standings after important points were decided yesterday.

Croatian centre back Domagoj Duvnjak had an exceptional game for the Champions League 2019/20 winners against Motor last night, leading his side with eight goals.

As the Croatian Handball Federation put it, it was a perfect birthday gift for the German club, as THW Kiel celebrated the 117th anniversary of their founding yesterday.

Good morning! Welcome to the morning after an exciting bonus day of EHF Champions League Men matches, where we enjoyed several rescheduled clashes that got the top-flight competition started in 2021 in style. Courtney Gahan here to round out the live blog coverage.

Check out the highlights of their win below!

Thank you for following the Live Blog tonight! Let's close the evening with a poll, have your say! And we will see you next time...

GROUP B REVIEW: After six straight victories in a row, Motor are crushed at Kiel

Strong second half gives Porto the points against Vardar

GROUP A REVIEW: After struggling in the first 15 minutes, Porto turned things around and finished strong to beat Vardar

GROUP B REVIEW: Nantes still have no home points this season, while the Slovenian champions are now joint sixth in the rankings

In the other matches, "Christmas" EHF Champions League champions, Kiel end Motor's winning streak, while Celje pull off a shock by beating Nantes. And It takes Porto about 40 minutes to shake off the Vardar threat. For full breakdowns of each of these ties see the match reports above!

In the first half we were not good enough, we knew that they run a lot. It is hard to play against them without a good defense because they score a lot of goals. We are focusing on the next game; we will try to improve our game in the meantime.
Jorge Maqueda
Veszprém

A big shout-out needs to go to the top scorer of the game Aleix Gomez (10/12), he really got Barça out of jail at times from the spot or on the break. The overall balance of this duel is now 15 victories of Barça.

And just like that, the game it out of touch once again. Barça have so many gears and Dolenec and Fabregas are as cool as cucumbers when the pressure is on. Three goals from the duo opened up the 36:33 gap.

What a bizarre bit of action! Jure Dolenec takes a standing shot from nine meters, he bounces it and it gets stuck to the crossbar with the resin on the ball, Cupara picks the ball off the bar launches it to Manaskov, he nets it on the break to pull it level 32:32! That's #Showtimeforchampions! 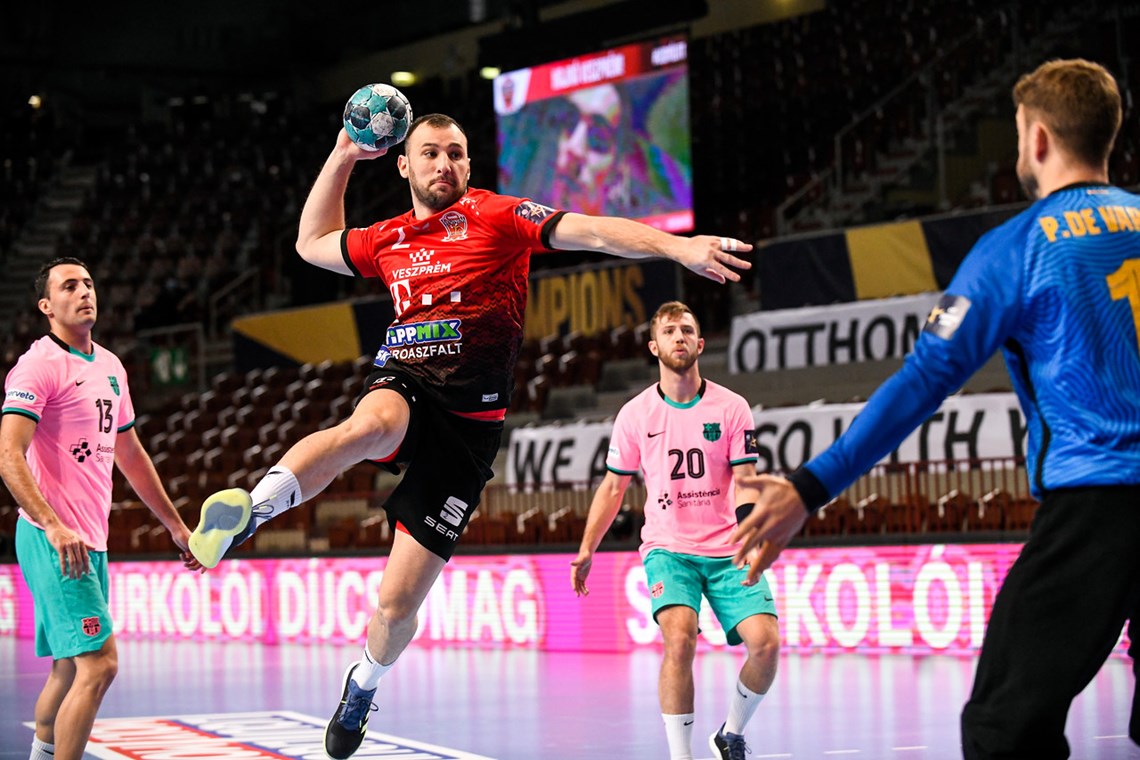 The comeback is ON! Maqueda is pumped and he has really kicked the hosts to gear, running and defending like it's his last game. He is six from eight and has netted at crucial points. Nilsson nets a fast break to bring it now just to two - 25:27.

Davis will have his work cut out for him at half-time to bring a lease of life back in to this Hungarian side. Jure Dolenec with his four goals is Barça's top scorer, while Vuko Borozan leads for the hosts with the same goal tally.

Before the game David Davis stated how February is a difficult month because half the players are tired and the other have are out of rhythm. And that's what it looks like out there for Veszprém - especially in attack. They will have to dig deep to make a game of this...

You may have notice Fernando Barbeito on the Barça bench instead of Xavi Pascual. Head coach Pascual couldn't travel to Hungary for personal reasons so assistant coach Barbeito takes the squad for this game.

Oh boy, David Davis, head coach of Telekom Veszprém HC wasn't happy with the decision making of his team in attack in the last time-out. And it is showing with Barça 8:6 lead.

The Barça fast break is the best in the game, just take that made it 2:1 for them. Aleix Gómez had no right to catch that pass to the line, and Arino not right to even make that pass in the first place - absolutely remarkable!

Barça have won all eight group matches so far and extended their impressive series to 22 EHF Champions League victories in a row, before they lost the final of the 2019 VELUX EHF FINAL4 against Kiel

I am really hoping for a classic here. Both sides have the best attacks of all teams with 290 goals (Barça) and 276 goals (Veszprém), what does this mean? Will they cancel each other out? Or a goal fest? Join us on EHFTV to find out!

GROUP A REVIEW: Thanks to a blistering defensive second half, Flensburg succeeded in Brest, a place where Paris and Szeged lost this season

We are very satisfied with two points and how we played. I first saw my players yesterday when they returned from Egypt. They looked tired but were ready to get this win. We had a good defence in the second half, especially when we changed the goalkeeper. Buric helped us a lot. Now we have a weekend off and can recover a little bit.
Maik Machulla
Flensburg-Handewitt head coach

Excellent game management when push came to shove their at the end for SG! They saw Brest's weaks links in attack and often gave them space to shoot (a lackluster Panic being the main culprate). Søgard's clutch 28:26 goal killed it off with just 40 seconds left. SG now move to the top of group A!

The SG defence looks like it is slowly figuring out Brest's attack and with Buric in goal making some key saves it seems the tide has turned once again. SG lead 26:24

Yet another turnover and SG net an easy fastbreak goal via Rød; Brest's top scorer, Marko Panic will need to improve his shooting percentage as it is really hurting them with him only netting 5/11. 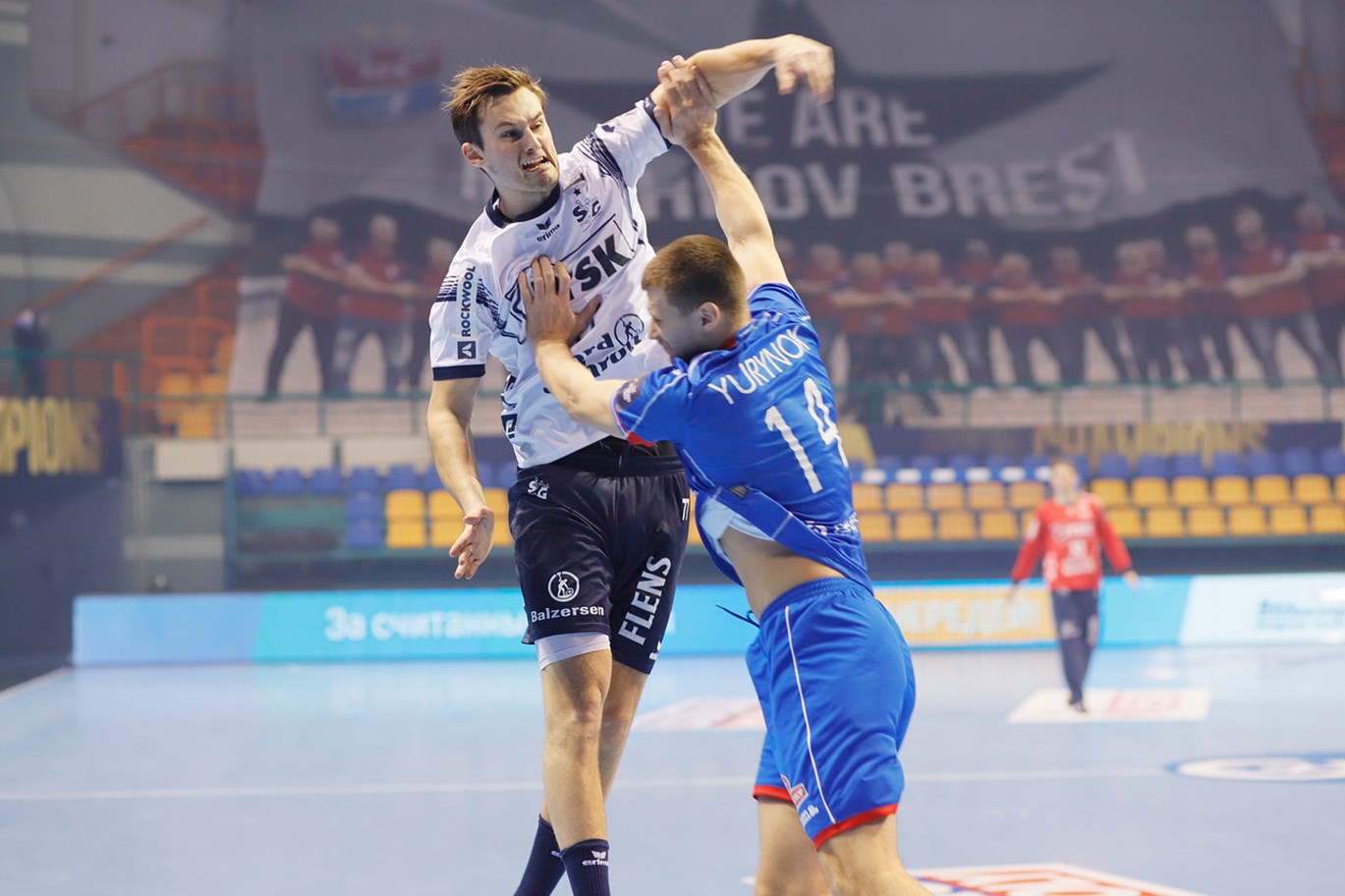 The heatwave is over for Wanne as he nets the next two chances to give SG a 24:23 lead.

Hampus Wanne, who was as cold as ice in Egypt 2021 for Sweden, is feeling the heat here in Brest as he missed the chance to pull it level from the seven-meter spot! Shumak punishes SG at the other end to give the hosts a plus two lead, 23:21!

Right on the buzzer! Panic for Brest makes a steal and nets to give the hosts a 15:14 lead going in at half-time! We have a game on our hands folks!

WOW! Brest have fought their way right back into this game and what a perfect in-flight goal from Malus to make it 14:14 right before half-time!

No, your eyes are not deceiving you, that is Alexander Petersson who just came onto court for SG Flensburg! With the injury of Franz Semper, SG signed the Icelandic legend from Rhein-Neckar Löwen until June 2021!

A lovely standing shot from Brest's Panic marks his third goal and we are all level at 5:5! Brest have calmed in attack and with Panic and Yurinok (2/3) now finding their range - we are set up for a good game!

Flensburg making it clear who they find the biggest threat in the Brest attack, with a very high 5-1 defence coming to meet out Skube. The German side leads 4:1 after five minutes. 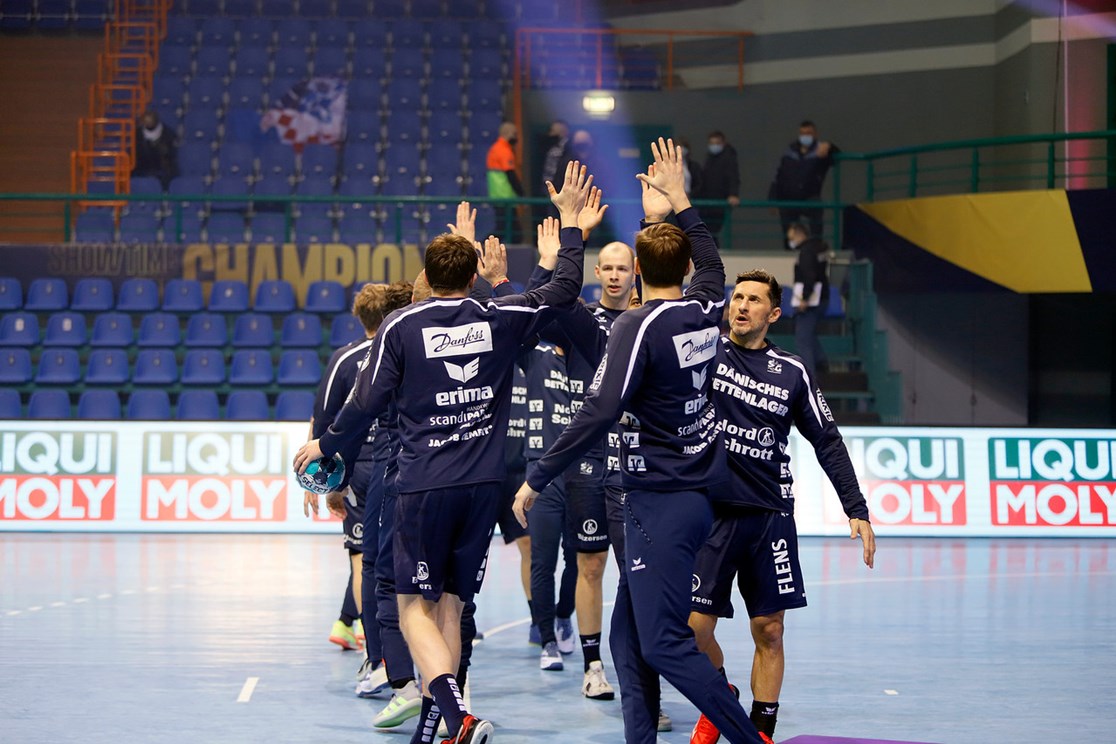 Keep your eyes peeled for Marko Panic's name on the scoresheet! The Brest sharpshooter can intermittently move top of the charts tonight!

This morning the German side boarded their flight with three Danish players that won the World Championship with their national team last week in Egypt: Simon Hald, Lasse Svan and Mads Mensah Larsen.

Jim Gottfridsson and Hampus Wanne are also silver medalists with Sweden, so lots of battled-hardened bodies returning from their adventures on the world stage.

We are just 40 minutes away from the throw-off of HC Meshkov Brest (BLR) vs SG Flensburg-Handewitt (GER)! This group A head-to-head is of course a rescheduled game from round 8 and sees #2 (Flensburg 13 points / 8 games) come up against #3 (Brest 9 points / 9 games). A big chance for the German side to go top of the group or for Brest to close the gap at the top of the table - very important!

P.S - It's amazing to have the EHF Champions League Men back!

27 EHF Champions League Men stars made it onto the podium at the recent Men's World Championship in Egypt, which ended on Sunday with Denmark defending their title from two years ago.

Read more about how Europe's premier competition was represented on the global stage below!

Welcome to the first day of EHF Champions League Men action in 2021! Courtney Gahan here getting the live blog started ahead of an exciting eventing.

Before today's games begin, get all the key facts for the upcoming clashes in the round preview.

Here's what you have to look forward to:

PREVIEW: Six world champions will be on deck this week as the EHF Champions League resumes

QUARTER-FINALS REVIEW: Györ secured a second win against Buducnost to proceed to the DELO EHF FINAL4 for the fifth time in a row

MOTW REVIEW: A seven-goal victory in the first-leg quarter-final gives Vipers the upper hand against Rostov

Five takeaways from the play-offs

ANALYSIS: With the quarter-final lineup now confirmed, what will we remember from the play-offs?

MOTW FEATURE: Vipers right wing Jana Knedlikova is relishing the underdog role and ready for a fight in Russia

Oftedal on Forbes '30 under 30' European sports and games

Semi-final pairings to be determined in Budapest

NEWS: The DELO EHF FINAL4 2021 draw will take place on Tuesday evening, with the semi-finalists to learn their opponents for the penultimate…

QUARTER-FINAL PREVIEW: Two Russian teams hope for results on the home court, while Györ and Brest aim to build on their first-leg success

Paris stay focused to qualify for the quarter-finals

PLAY-OFFS REVIEW: Despite a better performance from Celje, PSG were again too strong for the Slovenian side and win 31:23